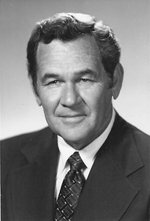 Born December 7, 1927 at Harrison, he was the son of the late Fred W. McMahan and Othella Moody McMahan. He graduated from Harrison High School and attended Arkansas State Teacher’s College (now UCA). He was a graduate of the Kansas City College of Mortuary Science and served in the United States Marine Corps.

Bill moved to Pine Bluff in 1955 to work for Ralph Robinson & Son Mortuary as a funeral director and embalmer. He retired in 1996 after 41 years of service and returned to Harrison.

He was predeceased by a daughter, Simone Earnheart.

A private service will be held in Maplewood Cemetery at Harrison.

The family extends special thanks to Harrison Rehab and Nursing Center and Legacy Hospice of Harrison.

Memorials may be made to Out of the Woods Animal Rescue of Arkansas, Post Office Box 7365, Little Rock, AR 72217.