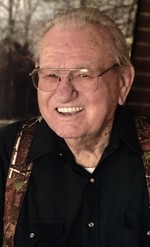 Walter Hoyle McClain, 93, of Pine Bluff passed away Wednesday, September 23, 2020. He was born December 20, 1926 in Rye to the late Walter Fern and Mamie Mae Ashcraft McClain.
Walter was reared and educated in Rye, attending the Pine Knot School in Rye, before moving to Pine Bluff in 1949. He worked as a mechanic for his self, Central Maloney, WA Manufacturing and Ben Pearson for over 17 years, before joining the Arkansas Highway Department, where he retired from in 1988. Walter enjoyed camping, hunting and fishing, and he was a member of First Cumberland Presbyterian Church.
Also preceding him in death were his sister, Minelee Ashcraft; and brothers, James McClain, Wayne McClain and Arthur McClain.
Survivors include his wife of 70 years, Annie Monk McClain, whom he married March 4, 1950 in Pine Bluff; daughters, Wanda McClain Brown (Joe) and Sandy McClain Baker (David); grandson, Kevin Zornek (Billye); great granddaughter, Kaci Zornek; brother, Mack McClain; and sister, Peggy Harton.
Graveside service will be 11:00 AM Saturday, September 26, 2020 in Union Cemetery at Rye with Bro. Dwight Shanley officiating. Visitation will be 10:00 AM until service time Saturday at the cemetery.