To share your memory on the wall of Tess Hill, sign in using one of the following options:

Born in Benton, Saline County, AR, on March 10, 1922, she was the only child of the late Arthur McKay Nicholson and Mary Lee Hughes Nicholson. The family moved to Pine Bluff in 1926.

Tess graduated from Pine Bluff High School in the class of 1941. This was the graduating class whose members left their high school years and walked directly into World War II.

After attending the Pine Bluff Modern School of Business, Tess began her employment on April 3, 1942 at the Pine Bluff Arsenal in the Mail and Records Department. She was an employee when the Arsenal manufactured and shipped its first production run of AN-M14 incendiary grenades for the war on July 31, 1942. She was employed for 42 years with the United States Federal Civil Service, which included the Pine Bluff Arsenal, Vicksburg, and Little Rock District of the Corps of Engineers. She retired from the Arsenal of February 3, 1984 as Manager of the Military Family and Bachelor Housing.

She approached her retirement with enthusiasm, pursuing several areas of interest. One was genealogy research which later resulted in writing and publishing her memoirs. Through her research, she later applied and was accepted as a member in the Arkansas Division, David O. Dodd Chapter of the United Daughters of the Confederacy. She was an active member of the Pine Bluff-John McAlmont Chapter of the Daughters of the American Revolution, and a member of the National Society of the Colonial Dames XVII Century.

After her retirement, Tess had an avid interest in supporting and participating in the political process at the local, state, and national levels. As a result, she became a member of the Jefferson County Republican Women’s Club. She attended the Republican National Convention in 1991 at Houston, TX and again in 1996 at San Diego, CA. She was an active member of the Broad Investment Club of Pine Bluff and was also a member of the National Association of Retired Federal Employees (NARFE). Her membership was in the Watson Chapel Baptist Church where she was a former member of the Moral Concerns Committee and the History Committee.

During the period of 2006-2007, Tess compiled and wrote a document entitled “Tess’s Walk Through the World War II Years”. She wrote about having joined the ranks of the many “Rosies”, representing the six million women who first found economic strength in the World War II era. Many women’s lives were forever changed by fulfilling careers offered as they walked into the workplace and became a part of the workforce during the war. To use a title coined during that time was those Rosie the Riveters were pioneers in their field.
The many experience and special stories that came out of the war years were deserving of recognition and documentation when compiled into stories and book form. These were known as works of “The Greatest Generation”.

In November of 2015, Tess was interviewed about her experiences working at the Pine Bluff Arsenal from 1942-1954 and 1968-1984. This interview as conducted for collections with the Library of Congress Veterans History Project in Washington, DC. The project seeks to collect first-person accounts of military or civilians who supported conflicts during all wars in our nation’s history. Tess’ interview focused primarily on her experience at the Arsenal during World War II. In June of 2016, Tess received a letter from U. S. Senator John Boozman thanking her for the role she played in our nation’s history.

Tess was preceded in death on September 8, 2013 by her husband of 64 years, Robert Lewis “Bob” Hill. They were married September 10, 1949 in the home of Dr. and Mrs. Ralph Dodd at Little Rock by Rev. Charles Lowry.

Tess was blessed with a long and happy life. She often referred to her life with Bob, her husband of 64 years as a “Joyous Journey” with many wonderful memories. Tess and Bob were a devoted and loving couple. They were proud of their family and excited to become “Pop” and “Mom” to their three grandchildren and six great-grandchildren. They loved holidays and family get-togethers. Any chance to spend time with their family was important to them.

After Bob’s death, Tess lived alone. In those “Sunset” years, living alone would have been impossible without a number of her dedicated friends. Each friend was there when needed. Tess noted that this definitely added another dimension to her life and brought joy and fullness to her life during times of loneliness.

For many years, Tess had a dream (or in her words, a VISION) to establish a museum to honor the Pine Bluff Arsenal. The Daughters of the American Revolution helped fulfill that dream. To her delight, the Pine Bluff Military and Veterans Museum opened in 2015.

A service in celebration of Tess’ life will be held Wednesday, February 10, 2021, 10:30 a.m. in the Chapel of Ralph Robinson and Son with Brother Todd Howard officiating. Interment will be in Memorial Park Cemetery.

Visitation will precede the service beginning at 9:30 a.m.

Memorials may be made to the Pine Bluff Military and Veterans Museum; the Bob and Tess Hill DAR Scholarship; or Watson Chapel Baptist Church.

The service will be livestreamed at www.RalphRobinsonandSon.com and recorded for later viewing.
Read Less

To send flowers to the family or plant a tree in memory of Tess Hill, please visit our Heartfelt Sympathies Store.

Receive notifications about information and event scheduling for Tess

We encourage you to share your most beloved memories of Tess here, so that the family and other loved ones can always see it. You can upload cherished photographs, or share your favorite stories, and can even comment on those shared by others.

Posted Feb 12, 2021 at 09:08pm
Tess and I knew each other from working at the Pine Bluff Arsenal but it was not until two events brought us together on a more personal basis. If you knew Tess at all one of her "assets" was - if she wanted something, she would not stop until it was accomplished. She wanted me to join the DAR, so she set out with a plan. Invite me to the meetings until, yes, I joined. The other was her vision for the Pine Bluff Arsenal Museum, she wanted me to be involved. So, she invited to the meetings and yes, now I'm the Secretary. Remembering Tess is easy, I will do it everyday. But missing her is a heartache that will never go away until we see each other again. Signed her friend Carolyn
Comment Share
Share via:
AP

Posted Feb 10, 2021 at 05:30pm
I am sorry for you in the loss of your Mother (and Grandmother). I wanted to tell you how much Mrs. Hill meant to me. My husband, James, and I used to talk to them after church. I could tell they were a very close couple. After Mr. Hill died, I watched as Mrs. Hill continued to come to church. She was always very upbeat, and had a smile on her face. One day as we were waiting for church to start, I went up to her and told her what a blessing she was to me, and how I admired strong women and how she inspired me by her strength. I told her I knew it must be hard to lose your husband, and I didn't know how I could handle it if it was me. I will NEVER forget what she said to me. She said, "Honey, I'm not strong. What you see is Jesus. It's not me. He is giving me this strength". I walked away from her with that ringing in my ears. I told my husband, if something ever happened to him, I might not have Mrs. Hill here to go to and ask, "How do you do this???", but Mrs. Hill sent me straight to the answer, and I know if I was ever in that circumstance, I could run to Jesus just like Mrs. Hill did. I am thankful for her reminder. I have shared it with a bunch of people. I was blessed to know your Mother.
Comment Share
Share via:
JR

Posted Feb 10, 2021 at 10:14am
Leann and Bill -- You and your families are in our thoughts and prayers today. Was saddened to see where Aunt Tess
had passed. Prayers for all. May God provide you with his loving comfort and give you peace at this time. Love to all.
Joan Hill Ratliff
Comment Share
Share via: 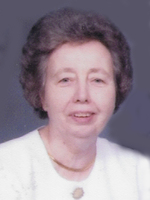