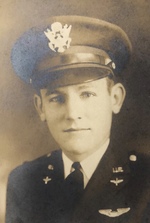 Born at Pine Bluff on September 17, 1917, he was a son of the late John Bates Avery Johnson and Hattie Culver Johnson. He graduated from Pine Bluff High School in 1934 and earned a Bachelor’s degree in Business Administration from Louisiana State University. He played clarinet in the LSU Band and was a member of Pi Kappa Alpha Fraternity.

Mr. Johnson joined the United States Army Air Corps and earned his wings in April of 1941, and was trained on the DC-3, and B-18 aircraft.. During World War II, he was stationed in Panama, flying reconnaissance missions over the Atlantic and Pacific Oceans looking for enemy submarines that might sabotage the Panama Canal.

After the war, he returned to Jefferson County and engaged in farming with his father. He later joined with his father-in-law in the G. R. McSwine Lumber Company, which operated a saw mill. The mill was later closed, and for a number of years he was a lumber buyer for the Owosso Furniture Company. In the 1950’s, he reestablished the G. R. McSwine Lumber Company as a lumber wholesale business. He operated the business until 2006. Mr. Johnson was president for over 50 years of the Westside Hardwood Club.

Mr. Johnson was very involved in Masonic activities for many years. He was a member of Pine Bluff Masonic Lodge # 69, a 32nd Degree Scottish Rite Mason, a York Rite Mason, and a past-potentate of the Sahara Shrine.

He was the oldest living member of First United Methodist Church, and was a past chairman of the official board.

A private family service will be held on Friday, April 3, 2020, 1:00 p.m. in Graceland Cemetery with Rev. Mike Morey officiating. Arrangements are by Ralph Robinson & Son. The service will be webcast live from our website, RalphRobinsonandSon.com so that others may attend the service in spirit.

A public memorial service will be held at a later date.