To share your memory on the wall of Roy Thayer, sign in using one of the following options:

Mr. Thayer was born July 26, 1937, in Pemiscot, Missouri, to the late Melvin Francis and Anna Bland Thayer. He grew up and received his education in Steele, Missouri. After high school, he joined the United States Army and served his country during the Vietnam War.

Mr. Thayer was a boilermaker superintendent for Brown and Root, Inc. for many years. He was a key component in helping construct power plants all over the country.

He was preceded in death by his parents and one sister, Kathleen Swagger.

Due to the Covid-19 Pandemic, the family is having a private memorial service.

To plant a memorial tree in honor of Roy I. Thayer, please visit our Heartfelt Sympathies Store.

Receive notifications about information and event scheduling for Roy

There are no events scheduled. You can still show your support by sending flowers directly to the family, or planting a memorial tree in memory of Roy I. Thayer.
Plant a Tree

We encourage you to share your most beloved memories of Roy here, so that the family and other loved ones can always see it. You can upload cherished photographs, or share your favorite stories, and can even comment on those shared by others.

Plant a Tree in Memory of Roy
Plant a tree
2 trees have been planted in memory of Roy I. Thayer
HS

Karen and Robert Turnage and family

Posted May 09, 2020 at 04:43am
Our thoughts and prayers are with you. May God bless each and every family member during this difficult time. Love,

Posted May 08, 2020 at 06:57pm
Prayers for peace and comfort during this time. Remember this is not goodbye it’s I’ll see you later on that glad reunion day.
Comment Share
Share via:
AT

Posted May 08, 2020 at 05:32pm
Went all went tubing in the snow one year. Of course I ended up going thru the middle and having the tube run me face down in the snow. Roy always loved telling that story. We would all climb in the car and just go driving. He always found the best places and we would see awesome animals. Roy loved an adventure.
Comment Share
Share via: 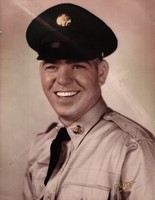