To share your memory on the wall of Ricky Tucker, sign in using one of the following options:

Provide comfort for the family of Ricky Tucker with a meaningful gesture of sympathy.

Receive notifications about information and event scheduling for Ricky

There are no events scheduled. You can still show your support by sending flowers directly to the family, or planting a memorial tree in memory of Ricky Joe Tucker.
Plant a Tree

We encourage you to share your most beloved memories of Ricky here, so that the family and other loved ones can always see it. You can upload cherished photographs, or share your favorite stories, and can even comment on those shared by others.

Posted Aug 11, 2019 at 08:55pm
RIcky and I were friends at the P.B. Arsenal, didn't go to school with him, He was 2 yrs younger. He'd come by my triplex sometimes and we played basketball in my front yard. Later in high school, He played for White Hall and I got to play for a much smaller school because we needed players. Every once and awhile we would see one another at tournament games and spoke while we could. He was always a good ole guy, even tho he played at a much higher level. God Bless you Ricky and your family, may you rest in peace...
Comment Share
Share via:

Sorry for my FB Profile Pic. I changed it back to my regular one on Facebook, but it didn't change it here.
SP

Posted Aug 10, 2019 at 10:47pm
All through school I was always just behind or beside Ricky in line because we had no students with names beginning in u's or v's. I was a Wallace so we were always in that order. Ricky was so sweet & such a considerate person. I always enjoyed talking to him (that's a bit of my hair & shoulder showing in the picture next to his senior picture) This brought back many memories. So very sad to hear of his passing. I will keep his family in my prayers. Sharon Wallace Piazza
Comment Share
Share via:
BH

Posted Aug 10, 2019 at 12:13pm
Rest In Peace Ricky, grew up together at Arsenal, graduated 1968 from WHHS , SUCH PRECIOUS MEMORIES. SO glad we were all together at our reunion. You were awesome friend love you and will miss you. Love Sue Berry Walters
Comment Share
Share via: 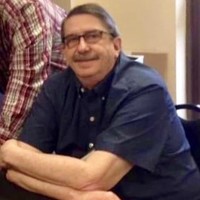