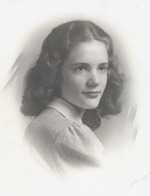 A lifelong resident of Pine Bluff, she was born April 11, 1926 to the late Griffith Ross McSwine and Mercedes Gill McSwine. She graduated from Pine Bluff High School in 1944 and Christian College at Columbia, MO in 1948. Her education culminated with finishing school in Paris, France.

Mrs. Johnson was primarily a homemaker. For five years she worked for the American Red Cross as blood coordinator for Jefferson County. She was also a Cub Scout den mother.

Well known as a “prayer warrior”, Nathalie was a member of First United Methodist Church where she taught Sunday school. She was instrumental in establishing several prayer groups in Pine Bluff, including the Little Bit of Heaven Prayer Group. Mrs. Johnson also organized the first interracial prayer group in the city.

In addition to her parents, she was preceded in death by her sister, Mercedes McSwine; and two grandchildren, McKenzie Johnson and John Johnson, IV.