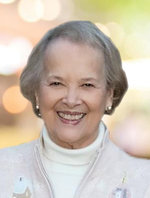 Martha Sue Caperton Pearce, 86, of Pine Bluff, died March 3, 2021 at Trinity Village Medical Center. She was born December 12, 1934 in Monticello, Arkansas and was the daughter of the late Clyde and Sarah Cruce Caperton. She graduated from Drew Central High School in 1952.

She married Don “Peewee” Pearce in 1955 and they opened Arkansas Printing Company in 1965. Their four children were raised in the business from a very young age and taught a solid work ethic- to work hard to become successful. She was a very devoted “Mams” – as her grandchildren fondly called her. She was very active in all of their lives and loved to smock dresses for them when they were young.

She was a devout Christian and very involved in First Christian Church of Pine Bluff where she served on numerous board positions through the years as well as Disciples Women. Her banana pudding was always a big hit at the dessert auction.

She was an active member of the Junior Sesame Club and PEO Sisterhood. You would also find her playing bridge regularly with friends in her spare time.

She loved to travel in her younger years and was a regular member of the Classic Club and Crown Club trips.