To share your memory on the wall of Margie Fikes, sign in using one of the following options:

Funeral will be conducted by Ralph Robinson and Son Funeral Directors in Pine Bluff, Arkansas. Visitation on Monday, December 28, will precede the funeral at 9:30 a.m. with the funeral service scheduled for 10:30 a.m. in Robinson’s Chapel. Funeral service will be officiated by the Honorable Mike Holcomb. All covid-19 guidelines will apply. The service will be livestreamed and the family encourages anyone who feels unsafe to watch the service on the livestream.

Memorials in lieu of flowers may be made to Ramick Cemetery Association, 312 Regal Oaks Circle, White Hall, AR 71602.
Read Less

To send flowers to the family or plant a tree in memory of Margie Hulse Fikes, please visit our Heartfelt Sympathies Store.

Receive notifications about information and event scheduling for Margie

We encourage you to share your most beloved memories of Margie here, so that the family and other loved ones can always see it. You can upload cherished photographs, or share your favorite stories, and can even comment on those shared by others.

Carroll, Sharon and boys sent flowers to the family of Margie Hulse Fikes.
Show you care by sending flowers

3 trees were planted in the memory of Margie Fikes

Posted Dec 28, 2020 at 03:27pm
Will miss our phone calls, Aunt Margie. You had a beautiful service even tho I had to watch it online. it reflected what a beautiful person you were.. We love you and will miss you. ……..Barbara and Beth
Comment Share
Share via:
FA

Posted Dec 27, 2020 at 12:42pm
May her soul Rest In Peace, and may her faith give comfort to her family. Love in Christ. Fredye Mac Long Alford
Comment Share
Share via:
LL

Posted Dec 26, 2020 at 11:41am
It was the fall of 1962, our Dad, suffering from terminal kidney disease, was admitted to the Veterans Hospital in Little Rock. My Mother, with few living relatives, wanted to be with my Dad in his remaining days. It was Mr. and Mrs. Fikes who stepped up and offered to let Don and I stay with them so Mom could be with Dad. Mrs. Fikes treated us like family and saw to it that we had all the attention and care that we needed. She introduced me to chocolate gravy, which to this day I haven’t had better! We also spent time with the Mayhan’s and Swim’s and our thanks and appreciation goes out to them but I’ll always have a special place in my heart for Marge Fikes, an angel when two young boys needed love and guidance! Rest In Peace, sweet lady!
Comment Share
Share via: 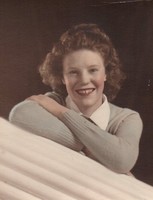