To share your memory on the wall of Louise Gross, sign in using one of the following options:

Louise received her early education in Pine Bluff, graduated from Pine Bluff High School, and completed cosmetology school in 1965. She began her career as a hair stylist in 1967 serving the beautification of Pine Bluff’s women for more than four decades. She was deeply loved and valued by her clients. She retired in 2019 from Diane’s Beauty Salon. After retirement, she relished an active social life with her family and friends. Most mornings she began her day with a phone call to her best friend and older sister asking, “Where are we going today?” and then the two would head off to breakfast and set out on their day’s journey. The sisters were the closest of friends and separated only in death.

She met Ellis James “Jim” Gross through mutual friends. He was the love of her life, and they spent 52 happy years together. The two enjoyed trips to Branson with extended family. When Louise became a mother, she was thrilled to have a daughter, Jamie. She was a selfless mother and loved taking shopping trips with Jamie, while the boys were away hunting.

The pinnacle event in Louise’s life was becoming a grandmother. She adored her grandson, John. She was proud of him from the first moment she held him until the last encounter when she awarded him for making good grades.

Louise was a lifelong member of St. Joseph Catholic Church in Pine Bluff and a member of the Altar Society. Her presence was felt each week in mass alongside her family. She had committed to the sacrament of adoration.

A Mass of Christian burial will be held at 10:00 a.m., Wednesday, January 6, 2021 and will be private due to COVID-19. Friends and family are invited to virtually attend the service via livestream on www.RalphRobinsonandSon.com.

To send flowers to the family or plant a tree in memory of Louise Aureli Gross, please visit our Heartfelt Sympathies Store.

Receive notifications about information and event scheduling for Louise

We encourage you to share your most beloved memories of Louise here, so that the family and other loved ones can always see it. You can upload cherished photographs, or share your favorite stories, and can even comment on those shared by others.

Posted Nov 23, 2020 at 12:18pm
Jim,
Our entire family is saddened to hear of the passing of Louise. We know she is now in the arms of God and reunited with family. We pray for God’s peace to cloak you all during this difficult time.

Posted Nov 21, 2020 at 03:24pm
Louise you are missed by many sweet friend...We can’t stop thinking about you and that beautiful bright smile and contagious laugh...We love you..Donna & Ron Renfro
Comment Share
Share via: 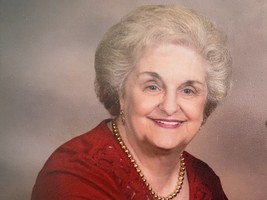