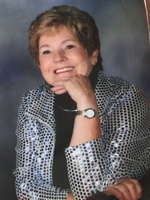 Born at Pine Bluff on January 14, 1945, she was a daughter of the late John Henry Shinall and Blanche Amelia Word Shinall. She graduated from Pine Bluff High School in 1964.

Kay spent the majority of her life as a homemaker. She had worked at Southwestern Bell Telephone Company, the Pine Bluff Commercial, and Weingarten’s.

She was a member of Watson Chapel Baptist Church. Kay loved to travel and spend time with her grandchildren.

In addition to her parents, her husband, Robert E. “Bob” Chavis, Sr. preceded her in death. Also predeceasing her are two sisters, Juanita Tucker and Oletha Shinall.