To share your memory on the wall of Johnnye Gray, sign in using one of the following options:

Print
Johnnye Louise (Lake) Gray, 92, passed away peacefully with family at her side on Thursday, May 13, 2021. She was born February 1, 1929 to Allen D. and Lucy Lake in Meroney, Arkansas and was the eldest of three children.

Johnnye grad... Read More
Johnnye Louise (Lake) Gray, 92, passed away peacefully with family at her side on Thursday, May 13, 2021. She was born February 1, 1929 to Allen D. and Lucy Lake in Meroney, Arkansas and was the eldest of three children.

Johnnye graduated from Pine Bluff High School, Pine Bluff, Arkansas, in 1948. She wed her husband of sixty-four years, Clyde E. Gray (also of Pine Bluff), in 1950 while he was serving with the U.S. Army. Johnnye became a mother and homemaker following Clyde’s return from a tour of duty in occupied Germany during the Korean War. She fulfilled her service as a military spouse at Ft. Benning, Georgia before returning home to Arkansas in 1964 to continue with the raising of her family of four sons.

Johnnye was an active member of the First United Methodist Churches of Pine Bluff and of Crossett, Arkansas where she developed many personal and lifelong relationships. Her devotion to the care of others along with her combined skills of sewing, knitting, and preparation of hearty meals for large gatherings were among her regularly recognized and appreciated attributes within her church family.

Johnnye extended her care and charities of service to multiple children and families of the Pine Bluff community. She devoted many years to the provision of a nurturing daycare service for local children that she cultivated within her own home. She was also well-recognized among a variety of community youth organizations (churches, schools, and sports teams alike), both as a direct volunteer and indirectly by her tireless assistance with transportation and other supplemental support for children and families in her neighborhood. In her later years, she continued to foster her fellowship with community members and family by making personalized greeting cards from the comfort of her home.

Funeral services will be held graveside at Graceland Cemetery in Pine Bluff on Saturday, May 15, 2021 at 2:30 PM with the Reverend Bryan Diffee and Brother Matt Daniels of First United Methodist Churches officiating. The family will receive friends at Ralph Robinson Funeral Home in Pine Bluff from 1:00-2:00 PM prior to the service.

In lieu of flowers, memorials may be made to Friends of the Crossett Public Library (https://crossettlibrary.com/index.php/friends/), and/or the First United Methodist Church of Crossett, Arkansas. Those wishing to sign the guest book may do so online at Ralph Robinson and Son Funeral Home, Pine Bluff, AR www.ralphrobinsonandson.com).
Read Less

To send flowers to the family or plant a tree in memory of Johnnye Louise Gray, please visit our Heartfelt Sympathies Store.

Receive notifications about information and event scheduling for Johnnye

We encourage you to share your most beloved memories of Johnnye here, so that the family and other loved ones can always see it. You can upload cherished photographs, or share your favorite stories, and can even comment on those shared by others.

Posted May 15, 2021 at 07:49pm
We spent many years being blessed by the talents of Johnny and Clyde Gray that they shared with First Methodist Church and anyone else they could assist . Johnnye was a fixture in the kitchen for church dinners where she prepared delicious dinners including her most special homemade bread. Her loving spirit never wavered and we are all better for having known her. We grieve her death along with her family, but know without a doubt that she was greeted in Heaven with the words, “ Well done my good and faithful servant”. Ann and Travis Creed
Comment Share
Share via:

Posted May 15, 2021 at 05:50pm
Charlie ,Robert, Brian & Glen I just heard about your Moms passing . I hate that I missed the visitation and funeral. Miss Johnnye babysat me for a while before I started School and she was so patient. She had to be to put up with Charlie ! HAHA! Seriously ,If she had a temper I sure never saw it. I'll always have good memories of Her and Clyde, Hickory street and Central Park. Condolences from The Reed family.
David Reed

Posted May 15, 2021 at 01:18am
Brian and family, I am sorry for the loss of your dear Mother. She was a giving and loving lady who helped out many people in her life, and loved by everyone who knew her. She will be remembered, and missed, by all the people she loved and was of service to. Prayers for all your family. Skip Tucker
Comment Share
Share via:
WF

Posted May 14, 2021 at 10:46pm
We are saddened at your loss. Mrs Gray was always the dearest and sweetest lady to us and all who knew her. Nothing got her down. Prayers for all the family
Comment Share
Share via:
TK 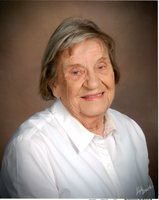