To share your memory on the wall of John Talbot, sign in using one of the following options:

John was born on August 28, 1954 at Eglin Air Force Base, Florida to John H. Talbot III and the late Dorothy (Armstrong) Talbot. John grew up in Pine Bluff, AR where he graduated Pine Bluff High School Class of 1972 and was an outstanding tennis player and member of the State Champion tennis team. He went on to play tennis at Hendrix College where he earned a Bachelors degree in philosophy. After several years serving as an assistant tennis pro at The Cloister Hotel in Sea Island, GA, he earned a Masters Degree from The Johns Hopkins University in Baltimore, followed by a Doctorate at St. David ‘s College, University of Wales, United Kingdom.

After teaching a few years at Georgia Southern University, he found his dream job teaching at Finger Lakes Community College in Canandaigua, NY, where he spent some 20 years, teaching Philosophy, Logic, and English. As an accomplished fencer, he also taught fencing there. John was also an accomplished amateur archeologist of Native Americans as well as a life-long dog lover, with three beautiful collies, Mosie, Mattie, and Bess.

Upon retiring, he returned to his roots in Pine Bluff, continuing to play tennis and spending time with his dad and sister there in Pine Bluff. Despite his academic and athletic achievements, he will be best remembered for his laughter, giant heart, and his untiring ability to pull pranks, most often on family members and the unwitting public.

The family requests no flowers. Memorials may be made to Heifer International, 1 World Avenue, Little Rock, AR 72202 or heifer.org.
Read Less

There are no events scheduled. You can still show your support by sending flowers directly to the family, or planting a memorial tree in memory of John H. Talbot IV.
Plant a Tree

Plant a Tree in Memory of John
Plant a tree
0 trees have been planted in memory of John H. Talbot IV
AA

Posted Dec 31, 2020 at 01:24am
Praying for his family and friends. I pray they feel God’s love, and a peace only He can give.
He will forever be remembered as a kind and caring son, brother, father, and friend.
A special hug for you Susan. I know you will miss him every day.
Comment Share
Share via:
BR

Posted Dec 30, 2020 at 12:27am
I am so very sad to learn of John's passing. I have many wonderful memories of him from growing up together in Pine Bluff and playing tennis at Eden Park Country Club. Also, we competed on the men's tennis team at Hendrix College. The first year I joined the team John offered me much support and kindness for being the only girl on the men's team. My thoughts and prayers are with each of you.
Beth Forney Reifsteck

Posted Dec 29, 2020 at 01:05am
Mr. Talbot, Susan, Thomas and Andrew, I am so saddened to hear of John’s sudden passing. My fond memories of growing up next door in our early childhood days. I read that John had 3 beautiful collies, I can remember your family’s collie when we were about 5 years old. John and I were on the first PBHS girls and boys tennis teams. We also played a lot of summer tournaments during our teen years. My prayers are with all the Talbots as you mourn John’s untimely passing. Rest In Peace, John.
Love , Laura West Fuger 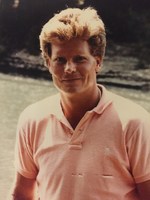