To share your memory on the wall of Joann Kongenske, sign in using one of the following options:

Born at Pine Bluff August 8, 1938, she was the daughter of the late Robert Ruggeri and Amalia Rocconi Ruggeri. She graduated from Pine Bluff High School.

Mrs. Kongenske worked as a computer programmer for Alltel prior to her retirement. She was a lifelong member of St. Joseph Catholic Church.

She married Ralph David Kongenske on June 28, 1958, and he preceded her in death on January 13, 2019. She was also predeceased by her brothers, Robert Ruggeri, Jr., Richard Ruggeri, and Don Ruggeri.

To send flowers to the family or plant a tree in memory of Joann Ruggeri Kongenske, please visit our Heartfelt Sympathies Store.

Receive notifications about information and event scheduling for Joann

We encourage you to share your most beloved memories of Joann here, so that the family and other loved ones can always see it. You can upload cherished photographs, or share your favorite stories, and can even comment on those shared by others.

Posted Feb 24, 2021 at 03:21pm
So sorry to see this about Joann we were friends and worked together for years before I moved from Pine Bluff. Your Mother was sweet lady and I dearly loved her. Love Judy Rackley Young

Posted Jan 27, 2021 at 03:55pm
Lois, Tim, and family, I am so sorry about the loss of your mom. I considered her a pillar of St. Joseph's, and she will be greatly missed. My prayer for all of you is that precious memories of her will comfort you during this sad time. Love and prayers for all.
Comment Share
Share via:
M

Posted Jan 25, 2021 at 10:54pm
While I worked at Davis Life Care, I had the privilege of knowing your mom. She was a very nice lady & I enjoyed my interactions with her. My prayers are with you in your loss. Sue Reed
Comment Share
Share via:
TB

Posted Jan 25, 2021 at 10:48pm
Lois and family, I will pray for all of you during this difficult. Your Mom was a nice and sweet woman. I'm so glad our paths crossed in the 1st grade Lois. I know God is embracing his new Angel and she is with your Dad now.
Comment Share
Share via: 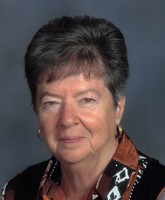