To share your memory on the wall of James Ridgway, sign in using one of the following options:

Print
On May 14, 2021, James William “Jim” Ridgway of Arkadelphia, passed away. He was preceded in death by his parents, William Basil Ridgway and Gladys Irene Hall Ridgway, and his first wife, Carolyn Watkins Ridgway.

He is survived by h... Read More
On May 14, 2021, James William “Jim” Ridgway of Arkadelphia, passed away. He was preceded in death by his parents, William Basil Ridgway and Gladys Irene Hall Ridgway, and his first wife, Carolyn Watkins Ridgway.

Born in Pine Bluff on September 12, 1935, Jim, graduated from the University of Arkansas in 1957, and served in the U. S. Army. He was a former member of Hawley Memorial UMC, Pleasant Plains UMC and is currently a member of Manchester UMC. He served as President of the White County chapter of Gideons International (2010-2017) and was a proud member of the Jefferson County Mounted Patrol.

Jim grew up on Ridgway Dairy, farmed, worked in the timber industry, sold veterinary pharmaceuticals and retired from International Paper Company in 2001. His early years gave him a great appreciation for farm animals, especially horses and chickens. After he retired, he was able to enjoy a small farm that included horses, mules, goats, chickens, rabbits, pigeons, sheep and his garden.

The service will be held 2:00 p.m., Monday, May 17, 2021 in the Chapel of Ralph Robinson & Son Funeral Home with Bill Mills, pastor of Pleasant Plains UMC, and Reverend Jessica Durand, pastor of Manchester UMC, officiating. He will be interred in Roselawn Cemetery. Memorials may be made to Gideons International. The family would like to thank Hospice Home Care of Hot Springs, Angela Jones and, especially, Chelsea Gilbert Hood.

To send flowers to the family or plant a tree in memory of James WIlliam "Jim" Ridgway, please visit our Heartfelt Sympathies Store.

Posted May 17, 2021 at 10:24am
Please accept our warmest condolences. James loved the outdoors so we are having trees planted in his memory as a living tribute.

3 trees were planted in the memory of James Ridgway

Posted May 18, 2021 at 11:36pm
My deepest sympathies to Kenneth, and to Jim's family. Our numbers keep getting smaller, it seems, and I miss each and every one who passes.

Posted May 17, 2021 at 10:37pm
Kenneth I read James’s obituary and was happy to know he had such a good and fulfilling life.?I know you will miss him and We’re sorry for your lossLanny and Beverly Gorman
Comment Share
Share via:
KT 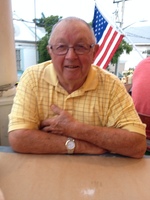