To share your memory on the wall of James McFadin, sign in using one of the following options:

To send flowers to the family or plant a tree in memory of James "Bud" McFadin, please visit our Heartfelt Sympathies Store.

in the card sent flowers to the family of James "Bud" McFadin.
Show you care by sending flowers

Posted Aug 11, 2020 at 02:37pm
Prayers to the family in your loss. I had the pleasure of working with Bud for a number of years at UAMS. He was a true gentleman and always had a smile to greet you. Cheryl Lane
Comment Share
Share via:
RS

Posted Aug 07, 2020 at 11:32pm
Our PHBS classmates keep leaving us. I don't like it. I ask that Peace attend you. Rejoice in memories that will always be with you.
Comment Share
Share via:
TB

Posted Aug 06, 2020 at 04:09pm
I worked with Bud on a number of projects at UAMS. He was a person that you could trust to do what he promised. His word was all I ever needed. Just one of the good guys. Always had a smile. Tom Butler
Comment Share
Share via:
BG

Posted Aug 05, 2020 at 05:57pm
Cherie and family, We are so sorry for you loss of Bud. Our thoughts and prayers are with you all at this time. Brenda & Bob Gullett

Posted Aug 04, 2020 at 05:47pm
Cherie, Stacy and Scott
Jimmie Don and I are so very sad to hear of Bud’s passing. Although it has been a long time since we have seen all of you, our love and care for you remains the same. We will be praying for you in the weeks to come. When Jimmie Don learned of Bud’s passing, he said Bud was one of the nicest, kindest People that he knew and his memories of working with him on tv ministry, Yokemen and Deacons At FBC are some of his fondest.
Love, Brenda and Jimmie Don Norsworthy
Comment Share
Share via: 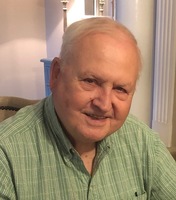