To share your memory on the wall of Harold McClain, sign in using one of the following options:

Provide comfort for the family of Harold McClain with a meaningful gesture of sympathy.

Born February 27, 1920 at Star City, he was the son of the late William DeKalb McClain and Dovie McEntire McClain. He graduated from Little Rock High School in 1936 and received a Bachelor of Accounting degree from Draughan’s School of Business in 1938, .

Mr. McClain served in the United States Army Air Corps for three and a half years during World War II as a gunnery officer on B-17’s and attained the rank of Major.

After military service, his work brought him to Pine Bluff in 1947. He received his Certified Public Accountant (CPA) certificate in 1948, and he and Cal P. Hollis then formed an accounting firm. He practiced until his retirement at the end of 1985. He and James L. Newberry then organized a commercial real estate firm, which they operated until 2004. Mr. McClain was a member of the Commercial and Investment Real Estate Institute (CCIM) and was voted a Life Member in 1993.

He moved to North Little Rock in 1998 and served as President of the Timbercreek Condominium Property Owners’ Association.

There will be a private family burial in Graceland Cemetery in Pine Bluff with Dr. Ken Shaddox officiating. The service will be webcast live Wednesday, April 15, 2020, beginning at 2:00 p.m. on our website, www.RalphRobinsonandSon.com A memorial service at First Presbyterian Church in Pine Bluff will be held at a later date.

In lieu of flowers or memorials, Mr. McClain requested that all read John 15:12 and do an act of kindness for someone else in his memory.
Read Less

To send flowers to the family or plant a tree in memory of Harold D. "Skeets" McClain, please visit our Heartfelt Sympathies Store.

Receive notifications about information and event scheduling for Harold

We encourage you to share your most beloved memories of Harold here, so that the family and other loved ones can always see it. You can upload cherished photographs, or share your favorite stories, and can even comment on those shared by others.

Posted Apr 16, 2020 at 06:44pm
Ellen and Hal, I am so sorry to hear of your father's death. He was such a gentleman and such a very good friend to me when I was going through my divorce. He would come by and we would walk on the golf course and visit. He went out of his way to help keep my spirits up when they were at rock bottom. I know he will be missed by his many friends. I love what he requested his memorials to be and I will definitely follow his wishes. Prayers for all your family during these difficult day ahead.
Denise
Comment Share
Share via:
C

Posted Apr 16, 2020 at 10:27am
McClain family, We are sorry for your loss, our thoughts and prayers are with you at this most difficult time. Your friends at CartiNlr
Comment Share
Share via:
LL

Posted Apr 15, 2020 at 05:45pm
I had the pleasure of meeting “Skeets” after he married my Aunt Glenda McClain. He was an honorable and gracious gentleman. Condolences to his family.

Posted Apr 15, 2020 at 04:31pm
Mr.Skeets and Ms. Glenda were such a huge part of our Timbercreek Tribe and made my 3 Grands always feel loved like they were family. Always told Skeets he had competition; Beckham loves Ms. Glenda. Chandler and Jett they would miss Him and his chocolates! We love and miss you Glenda and will check on you when I return from Florida. Stay safe, healthy and happy and may Mr Skeets Rest in Peace. Love You-Karon Rosa, Kara and Kris, Chandler, Jett and Beckham
IMG_5593.jpg
Comment Share
Share via:
A

Posted Apr 15, 2020 at 11:26am
Ms. Glenda and Family
We are saddened to learn of Skeet's passing. He was always such a happy person to be around, straight up and always concerned more about others than himself. He was a pleasure to be around. I know that he too loved having you in his life and you in his. Prayers that the memories, family and friends carry you through the times ahead. Skeet’s will be missed. Here if you need us. Love
Amelia, Bill and Liebe 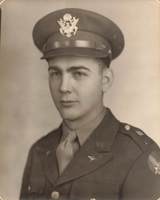 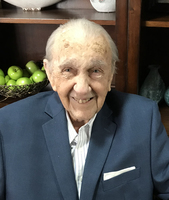 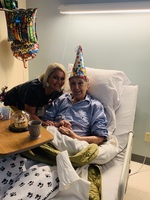 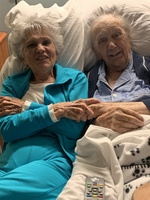