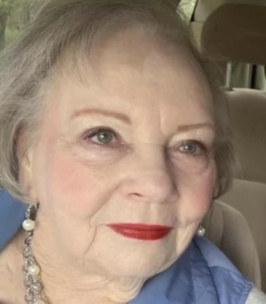 Gwendolyn Dolores Johnson Reed was born June 21, 1934, in Honey Grove, TX, to Evers Lee Johnson, Sr. and Tommie Evelyn McFatridge Johnson. She was a 1952 graduate of Pine Bluff High School, and later became an insurance agent and District Manager for Pyramid Life Insurance Company. In the 1960’s and 1970’s, she served as President of the PTA at Sam Taylor Elementary. During the time her children played sports, she proudly took on the title of “Team Mom” and was at every one of their games or anything in which they were involved.  She was a Red Hatter, and a former member of Hazel Street Church of Christ, and later a member of the Highway 79 Church of Christ. Her hobbies included gardening and growing flowers (especially roses), baking and cooking, and being part of family get-togethers and vacations.

Gwen passed away on Tuesday, November 22, 2022, at her home after an 8-year battle with cancer. She was preceded in death by her parents; her husband, Hollis Lee Reed; her son, Hollis Lee “Sonny” Reed, Jr.; a grandson, Reid Livingston; great-granddaughter, Morgan Norrell; and sister, Carolyn Bryant.

Visitation will be 10:00-11:00 A.M. Saturday, November 26, 2022, in the Chapel of Ralph Robinson and Son with funeral services following at 11:00 A.M. with Mr. Clarence Fell officiating.  She will be laid to rest beside her beloved husband in Brown Cemetery.

The family will be at the home of Regina Staton.