To share your memory on the wall of Gladys Terry, sign in using one of the following options:

Provide comfort for the family of Gladys Terry with a meaningful gesture of sympathy.

We encourage you to share your most beloved memories of Gladys here, so that the family and other loved ones can always see it. You can upload cherished photographs, or share your favorite stories, and can even comment on those shared by others.

Matt an khloe sent flowers to the family of Gladys Aleene Strahan Terry.
Show you care by sending flowers

Posted Jul 09, 2019 at 10:29pm
Donnie and Family, I am so sorry to read about the passing of your Mother. May God comfort you at this time.
Comment Share
Share via:
GB

Posted Jul 09, 2019 at 10:29pm
Donnie and Family, I am so sorry to read about the passing of your Mother. May God comfort you at this time.
Comment Share
Share via:
RH

Posted Jul 08, 2019 at 11:51pm
The Reaves family send our love. We remember her smile and all her hard work that made Chapel Academy a better school for us all. Our prayers are with all the family.
Comment Share
Share via: 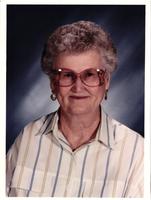