Obituary for Geneva A. Peterson (Smith) 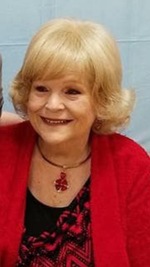 Geneva A. Smith Peterson, 70, lifelong resident of Cleveland County, passed away Tuesday, August 20, 2019, at Baptist Health Medical Center in Little Rock.
Mrs. Peterson was born March 30, 1949, in Rison, a daughter of the late Matthew W. and Arie A. Stover Smith. She was reared and received her education in Woodlawn, where she graduated from Woodlawn High School in 1967.
She married Leonard A. Peterson, May 20, 1967, in Rison.
She started her working career as a secretary for Electrolux in 1975 and worked there until 1988. Mrs. Peterson went to work for Ralph Robinson & Son Funeral Home, where she worked as a preneed counselor for 16 years.
She was a member of Rison Pentecostal Church of God, where she formerly served as a Sunday School Teacher.
Mrs. Peterson is survived by her husband of 52 years, Leonard A. Peterson; three daughters, Susan Starks, Tammy Fullbright, and Holly Riley, all of Rison; six grandchildren; seven great-grandchildren; three step grandchildren; seven great-step-grandchildren; stepdaughter, Beverly Griswold of Sparks, Nevada; two brothers, Jim Smith, and Will H. Smith, both of Rison; and a sister, Joyce Campbell of Pine Bluff.
She was preceded in death by her parents; brother, Curtis Aud; sister, Jo Ann Miller; and a great-grandson, Jaxson Fullbright.
The family will receive friends Thursday, August 22, 2019, 5:00 to 7:00 PM, at Robinson’s.
Funeral services will be held Friday, August 23, 2019, 10:30 AM, in the Chapel of Ralph Robinson & Son Funeral Home with Reverend Charles Wooley officiating. Burial will follow at Friendship Cemetery in Cleveland County.