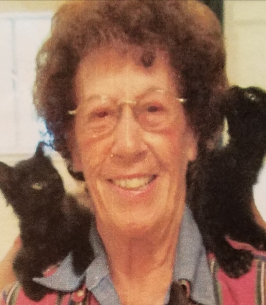 Frances “Granny Franny” Louise Benefield Leonard O’Rear was born August 29, 1933 to Harve Thompson Benefield and Ida Lenora Stroupe Benefield in Vimy Ridge, Arkansas. She is the 8th of 15 children. Frances began her early working career with Westinghouse in the 1950’s. Then known as “Sue” or “Toni,” Frances was always the life of the party. This continued throughout her life, often introducing herself as ‘charming’ Sue, Fran, Frances, or Granny Franny.

In 1956, Frances (Sue) met Wesley J. Leonard Jr., who was stationed at LRAFB. Sue was intrigued that Wesley was from New York. After 5 months, Sue and Wesley were married on July 13, 1956. Soon, Sue moved to New York to live with her in-laws while her new husband was stationed in Soderstrum, Greenland. Upon his return, they moved to Plattsburg, New York, where they became parents to a daughter, Jayne Marie. Exactly 2 years later, they became parents to a son, Steve Nelson. The family soon moved to Itazuke Airforce Base in Kyushu, Japan, where they lived from 1963-1967. Upon returning state-side, the family lived briefly in Syracuse, NY. Then settling on Montauk Point Long Island, NY, at Montauk AFB. Sue worked in the bases dining hall from 1968-1972 and was involved in many of the groups and affiliations on base such as NCO Club and Wives club.

After retiring from the air force, the family returned to Arkansas, living first in North Little Rock, then moving to Pine Bluff in 1973. Here, Sue became Fran again. Beginning in 1974, Fran was the hostess and cashier at the admiral Benbow restaurant until 1980. She was also the ticket lady at the Broadmoor Twin Cinemas from 1976-1980. In 1981, Fran and Wesley divorced, and Fran moved to Chicago and then Iowa City, Iowa. In Iowa City, she found her soulmate, Bill O’Rear. They were married August 27, 1983 and remained married until his passing in December of 2018. This relationship was unique in that both were named Frances and Francis (Bill.) Bill was at one time Frans’ brother-in-law, married to Fran’s older sister, Martha. Fran once told her daughter, “I have been in love with Bill O’Rear since I was 12 years old, and Martha brought him home.

The family would like to thank Palliative Care and Hospice Home Care for their loving care.

In lieu of flowers, the family asks that memorials be made to Greenlee Baptist Church at 4901 Old Warren Rd, Pine, Bluff, AR, 71603.

A celebration of life will be held Saturday, December 3, 2022, at 1:00 p.m. at Greenlee Baptist Church. Brother James Watson will be officiating.