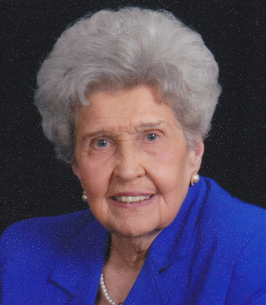 She was born on October 30, 1928 at White Hall, and graduated from White Hall High School in 1947. Edith and her husband, John, owned and operated John F. Wilson Real Estate and Insurance for nearly 30 years. She was a member of First Baptist Church of White Hall.

Edith was a wonderful mother and wife who devoted her life to her family.  Nothing was more important.  She not only supported the activities of her children, but she became actively involved.  Over the years she acted as a scout leader for both boys and girls.  She also attended countless band and choir concerts, parent teacher conferences, and sporting events.  She was very proud of her children and the men and women that they became.  She was also active in the American Business Women’s Association and the Jefferson County Republican Women.  Edith was also a wonderful cook.  Nobody ever left her home hungry.  Edith was an avid Razorback fan and brought that type of passion to everything she did.  She lived a very full life and will be sorely missed by everyone who knew her.

Edith’s funeral service will be Saturday, Nov. 5, 2022,10:00 a.m. in the Chapel of Ralph Robinson & Son. Burial will follow in Graceland Cemetery at Pine Bluff.