To share your memory on the wall of Ed Thompson, sign in using one of the following options:

He farmed at Earle for several years and then went to work for the U. S. Army Corps of Engineers on a surveying crew and as a dredging inspector. In 1951, he moved to Pine Bluff to work for the Federal Compress and Warehouse Company, where the vast majority of the cotton produced in Arkansas was held prior to shipment. In 1961, he went to work for Pine Bluff Warehouse Company, where he started as manager and ended up as owner of the company, which operated three ports along the Arkansas River at Pine Bluff, Fort Smith, and Clarksville, along with another three ports at Helena, West Memphis, and Osceola on the Mississippi River.

Ed Thompson was a visionary when it came to the transportation of commodities by river barge. The McClellan-Kerr Arkansas River Navigation System was in its infancy in 1971 when he took another big step-building the Port of Pine Bluff along with several other ports along the Arkansas River. The system of locks and dams helped make the river more stable and also eased flooding. This allowed year-round barge traffic, which changed the way that many Arkansas companies moved their products to ports worldwide. He also served as a past chairman of the Arkansas Waterway Commission.

He and his life partner, the late Wanda Bateman, began Margland, Inc. which operated a bed and breakfast house in Pine Bluff. Over their 30-plus years of operation, they provided warm Southern hospitality and entertained visitors from around the world. He and Wanda were active in many charities, including the THV-11 Annual Cereal Drive and the American Cancer Society. Even though he had retired from active business years earlier, his charity work carried on for the rest of his life.

Private graveside services will be held Friday, August 14, 2020 in Cogbill Cemetery at Wynne, AR with the Rev. C. B. Baker officiating. Arrangements are by Ralph Robinson & Son Funeral Directors.

Online condolences may be shared with the family at RalphRobinsonandSon.com
Read Less

To plant a memorial tree in honor of Ed Thompson, please visit our Heartfelt Sympathies Store.

Receive notifications about information and event scheduling for Ed

Print
The funeral service is private.

We encourage you to share your most beloved memories of Ed here, so that the family and other loved ones can always see it. You can upload cherished photographs, or share your favorite stories, and can even comment on those shared by others.

Posted Aug 17, 2020 at 10:25am
To Jeannie, Margie, Larry and Bob: I wanted you to know I am sorry about Ed's passing. I had occasions to talk to him in person recently and he was still sharp as a tack and still in a hurry! Your friend, Zack Taylor
Comment Share
Share via:
LH

Posted Aug 14, 2020 at 03:29pm
Marjie and Jeanne, I knew your dad was an amazing man but after reading about him there was so much more and he had such a giving heart and cared so much about the City of Pine Bluff. You both are in my prayers. I love you both. Cousin Laura
Comment Share
Share via:
CM

Posted Aug 14, 2020 at 01:50pm
Jeanne, I am so sorry to hear of your dad passing. He use to visit the warehouse in West Memphis and always came back to my office to say hello and chat a few minutes. I will keep your family in my prayers.
Comment Share
Share via:
LB

Posted Aug 13, 2020 at 02:21pm
Jeanne and Margie, how blessed you are to have had your wonderful daddy with you for such a long time. I know it's a comfort to know he’s now with your mother and other loved ones in unimaginable joy.
Comment Share
Share via:
AS 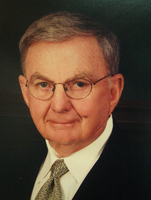