To share your memory on the wall of Dr. Herman Ginger, sign in using one of the following options:

Provide comfort for the family by sending flowers or planting a tree in memory of Dr. Herman Ginger

Provide comfort for the family by sending flowers or planting a tree in memory of Dr. Herman Ginger

He was born March 9, 1942 in Pine Bluff, son of Cecil Ginger and Mary Frances Caldwell Ginger.

He was born March 9, 1942 in Pine Bluff, son of Cecil Ginger and Mary Frances Caldwell Ginger.

Dr. Ginger was reared and received his early education in Pine Bluff, graduating from Pine Bluff High School in 1960. He earned his Bachelor’s Degree from the University of Arkansas at Monticello in 1964. After graduation he went to work for Boeing as an engineer in New Orleans, Louisiana. He left New Orleans in 1968 to go to Optometry school in Memphis, TN at Southern College of Optometry. He opened his practice in Pine Bluff July 13, 1972.

He also served as an InfantSEE and Vision USA volunteer and as President and Secretary/Treasurer of the Southwest Council of Optometry. Dr. Ginger served as President of the Arkansas Optometric Association in 1999 and earned the Lifetime of Excellence Award from the Arkansas Optometric Association in 2014.
He served as a Justice of the Peace for the Jefferson County Quorum Court from 2002 until 2020. During his term of the Quorum Court, he served as chairman of the Finance Committee and the Public Safety/Emergency Services Committee. He also served on the Community Development and Grants Committee and Solid Waste/Recycling Committee.

Dr. Ginger was a long-time member of First United Methodist Church of Pine Bluff and recently became a member of the Pine Bluff Community Band.

In his spare time, Dr. Ginger loved to work on various projects in his shop, play musical instruments, sing and spend time with family.

Survivors include his wife, Suzanne Yeager Ginger, whom he married November 27, 1964 in Fordyce, Arkansas; daughter, Amanda Ginger of Pine Bluff; sister, Cecile Andry of Metairie, Louisiana; brother, Dr. Darrell Ginger and his wife, Rebecca, of Fayetteville; granddaughter, Maribeth Howerton of Ruston, Louisiana; and an abundance of nieces and nephews.

Funeral services will be 10:30 a.m., Tuesday, August 4, 2020 in the parking lot of First Assembly of God in Pine Bluff with Reverend Carlton Cross and Pastor Gary Bell officiating. All attendees other than those participating in the service and sitting with the family are asked to remain in their vehicles for the service and listen through the radio on 95.1 FM or follow our webcast on www.RalphRobinsonandSon.com.

There will be a drive through visitation Monday evening from 5-7 p.m. in the parking lot of First Assembly of God. Attendees are asked to greet the family from inside their vehicles during the visitation.
Memorials may be made to St. Jude’s Children’s Research Hospital, Attn: Tribute Department, PO Box 1000, Department 142, Memphis, Tennessee 38148.

Arrangements were handled by Ralph Robinson and Son Funeral Directors of Pine Bluff. Family and friends may leave typed or video messages on the funeral home website, www.RalphRobinsonandSon.com.
Read Less

To send flowers to the family or plant a tree in memory of Dr. Herman Ginger, please visit our Heartfelt Sympathies Store.

Receive notifications about information and event scheduling for Dr. Herman

We encourage you to share your most beloved memories of Dr. Herman here, so that the family and other loved ones can always see it. You can upload cherished photographs, or share your favorite stories, and can even comment on those shared by others.

Posted Aug 11, 2020 at 09:01am
I'm so sorry to hear about Dr. Ginger's passing. He was such a wonderful person, the years that I worked for him were great. Love and Prayers Suzanne & Amanda.
Comment Share
Share via:
RS

Posted Aug 07, 2020 at 11:18pm
Cold water baths in the White River. Marching in the band @ PBHS. Getting an eye exam in his office. Knowing what the Cotton Belt was/is. Being a friend. Knowing what's important. These are just some of the memories I shared with Herman. Rest In Peace FRIEND.
Comment Share
Share via:
SM

Posted Aug 04, 2020 at 10:18pm
I am so sorry to hear of the passing of Dr. Ginger. He was a great doctor and wonderful person. I started coming to his office upon my relocation from Michigan and continued until I moved away. He and Mrs. Ginger always were always so warm and welcoming to me. They did not know how much I valued that, at the time moving to a new place over a 1000 miles from the only place I knew as home and recently loosing my own father less than a year prior.
They were always such a delightful table to wait on during my time at Red Lobster. I do not know if they will remember me, but I will alway remember them. Heaven just gained another angel. My deepest condolences to Mrs. Ginger, your children, and your family. I know the hurt and heart ache that you all are feeling. However it does get easier. May God keep you, bless you, provide you understanding and love during this painful time.
With love and sincere gratitude
Stephanie Mobley
Comment Share
Share via:
EW

Posted Aug 04, 2020 at 04:41pm
So sorry to here about Dr. Ginger. Eugene & I loved him so much. Pine Bluff has lost a great man. Suzanne you are in our thoughts and prayers. Eugene & Lisa
Wright.
Comment Share
Share via:
AM

Posted Aug 04, 2020 at 04:12pm
Suzanne, Amanda, and Maribeth, this is Pam. I just want you to know I am with you in my heart, right now, following the funeral. ( I hope it helps ease your pain some just knowing I am here. ) I was with you watching Dr. Ginger's funeral service live. It was a blessing to be able to attend the funeral by way of live recording, but you know I would have much rather been there with you and hug you, cry with you, spend time with all three of you, my friends. It was so good to see and hear Bro. Fred again. Everyone did a beautiful job. It was very well organized and planned. Thank You to everyone who worked toward bringing the funeral service to the rest of us! I really was thankful Suzanne, Amanda, and Maribeth when you three stepped in front of the camera and I was able to SEE YOU Suzanne, YOU Amanda, and YOU Maribeth !!! Seeing you HELPED CONNECT US, it made me feel better seeing you. Now, I want you three to know I am still with you. I have been praying for you all and will continue -- keeping you close in my thoughts and prayers in the weeks, months, and years ahead of us all. This does not seem real. Please accept My Deepest Heartfelt Sympathy. Our strength comes from The Lord. I truly care about your grief, your suffering, your pain. Again, Special Thanks to everyone who worked and made it possible for me to attend Dr. Ginger's funeral and to see it a second time, which I did. I love you three ladies, Dr. Ginger's 3 girls ! We will see him again. The Bible tells us we will be known as we were known. May The Lord bless you Suzanne, Amanda, and Maribeth and may He keep you in His care, comfort you, guide you, and lead you in the days and years ahead. Take care of each other. I love you, Pam
Comment Share
Share via: 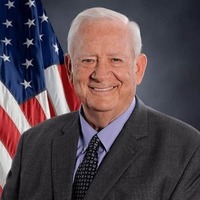