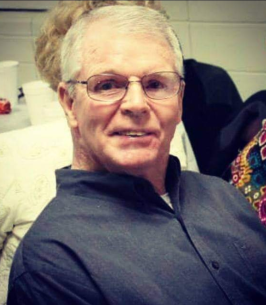 He graduated a Proud Zebra from Pine Bluff High School in 1965 and afterwards attended Arkansas A&M University (UA Monticello). There he received his BSE in Physical Education and Recreation.

Charlie, who had dystonia and cerebral palsy all his life, influenced the lives of hundreds of people through his involvement with athletics. As a young man, he spent a lot of time at the Boy’s Club, which was located at 5th and Main in downtown Pine Bluff.

After graduation, he had a graduated assistantship at UCA (University of Central Arkansas) but that didn’t work out due to his interest in this certain young lady he had met. He cut class one Friday and drove to Pine Bluff to speak with Chuck Moore, who worked for the Office of Economic Opportunity and later became Mayor of Pine Bluff. Charlie was informed that there was an open position for a Coach at Jenkins Children’s Center. He ultimately took the job and worked there for 7 years. While at Jenkins, he organized the 1st Special Olympics in Southeast Arkansas. He also took a group of kids to the 1st International Special Olympics at Soldier Field in Chicago and the 2nd International Special Olympics held at UCLA. By the time they went to UCLA, that certain young lady had become his wife and she accompanied him.

After leaving Jenkins, Charlie took a job with Pine Bluff Parks and Recreation. He was the recreational coordinator for P&R for seven years before being named Director and he remained in that position for 8 more years. In 1986, he took a job with Arkansas State Parks and relocated his family to Lake Village. There he served as park superintendent for Lake Chicot State Park.

In 1989 he returned to Pine Bluff to be closer to his Mother. He went to work at the Pine Bluff Arsenal where he held a variety of positions before taking medical retirement in 1996. That same year he was ordained as a Deacon at South Side Baptist Church.

In October of 2010, Charlie received the Spirit Award and was inducted into the University of Arkansas at Monticello’s Sports Hall of Fame. He was so excited and proud to receive that honor and his former Coach and now friend, Ray Utley, came up from Dallas to be a part of the festivities.

As Charlie grew older, he grew into the greatest role he ever had. PAW. He loved spending time with Diana, his kids and especially his grandbabies. He spent his later years speaking of the Glory Days of Zebra Football and the many accomplishments he’d achieved in his storied existence. He had a rock solid faith in God, and because of that faith, there is no question as to where Charlie is and what he is doing now.

He was preceded in death by his parents and one sister, Jackie Baker Kimbrell.

Memorials can be made to The Gideon International at www.gideons.org/donate