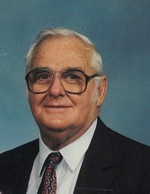 Mr. Lawson was reared and received his early education in Pine Bluff, graduating from Watson Chapel High School. He served in the United States Army during the Korean Conflict.

He earned his bachelor’s degree in History from Arkansas Agricultural and Mechanical College (now University of Arkansas at Monticello).

Mr. Lawson was a salesman for Jay Freeman, Inc. for many years before owning and operating Pine Bluff Foods.

He was an active member of First Baptist Church of Pine Bluff, serving as Superintendent of the McClanahan Sunday School Class for over 15 years.

Along with his parents, he was preceded in death by his wife of 60 years, Dortha Via Lawson; three brothers, Allen, Bill and Jim Lawson; and two sisters, Marie Shiver and Katie Horn.

Private funeral services will be 1:00 p.m., Saturday, December 19, 2020 with Reverend Kenneth Thornton officiating. Interment will be private. Due to covid-19 concerns, there will be no visitation. Family and friends not attending the private service are invited to watch the livestream at www.ralphrobinsonandson.com. If the livestream is interrupted due to weather or other issues it will be uploaded for viewing within 24 hours.

Family and friends may leave typed or video memories, condolences or stories for the family at www.ralphrobinsonandson.com.