To share your memory on the wall of Bobbie Hogan, sign in using one of the following options:

To send flowers to the family or plant a tree in memory of Bobbie Ann Hogan (Nipper), please visit our Heartfelt Sympathies Store.

Receive notifications about information and event scheduling for Bobbie

We encourage you to share your most beloved memories of Bobbie here, so that the family and other loved ones can always see it. You can upload cherished photographs, or share your favorite stories, and can even comment on those shared by others.

Posted Apr 23, 2021 at 09:41pm
Glenn and Teresa,
We are so sorry to hear of Bobbie's passing. We have many memories of a truly sweet person.
Jean Bryant Abbott and Family (Anne and Bill)
Comment Share
Share via:
FI

Posted Apr 22, 2021 at 09:19am
Glenn, I am very sorry to learn of your mother’s passing. I did not know her, but from the obituary she lived a long and fulfilling life. That is a small consolation as there is no good time for such a loss. Our prayers for you and the family will continue. Hope you are well otherwise. Fred Davis
Comment Share
Share via:
M

Posted Apr 22, 2021 at 08:50am
Bobbie was always a sweet and lovely lady during the years I knew her at Coca-Cola. I also saw her several times at Trinity Village in the years that followed. I very much admired her grace and personal warmth. She was good company. Sending prayers for the family.
Comment Share
Share via:
BT

Posted Apr 21, 2021 at 07:02pm
Glenn, I was so sorry to hear about your mother. She was a very special lady to me. I loved working with at Coca-Cola. Prayers for you and your family. Becky Taylor
Comment Share
Share via: 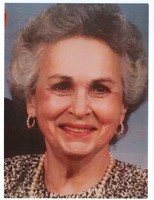