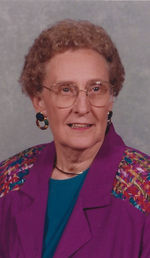 She was born April 11, 1928 in Pine Bluff, daughter of Earl M. and Virgaline Harter Offutt.

Mrs. Bell was reared and received her early education in Pine Bluff and played basketball for the Pine Bluff Zebras.

Mrs. Bell was a devoted homemaker and member of First Presbyterian Church of Pine Bluff, where she sang in the choir for 25 years. She was a loving and nurturing mother for her children and grandchildren and devoted caregiver for her nephew, Gary Watts. Mrs. Bell and Gary moved to Bentonville in 2009, where they became members of First Presbyterian Church of Bentonville.

Along with her parents and husband, she was preceded in death by two brothers, John Earl Offutt and Robert A. Offutt; and two sisters, Donalda Watts and Earline Boast.

A graveside service will be 2:30 p.m., Thursday, March 4, 2021 at Memorial Park Cemetery with Reverend Carla Harrel Mathews officiating. Visitation will be Thursday afternoon from 1:00-1:45 p.m. at Ralph Robinson and Son Funeral Directors.