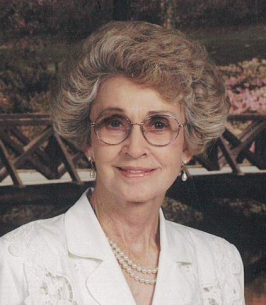 Barbara Muse Hall Gandy, age 93, of Pine Bluff, died April 20, 2022, at her home.  Born May 12, 1928, in Bastrop, Louisiana, she was a daughter of the late Albert Ben and Lucille Muse.  She received her education in Bastrop and graduated from Bastrop High School. Barbara Muse married Marlin Hall on September 21, 1945, and they lived in Bastrop until June 1958, when they moved to Pine Bluff to work for International Paper Co. Barbara retired in 1990 from IP, after thirty years of service.  She started her career as a Clerk Stenographer and worked in several positions over the thirty years of her employment.  She held the position of Supervisor, Maintenance Training at the time of her retirement. She was also a member of the Quarter Century Club of International Paper Co.

Married for forty-seven years, Mrs. Hall returned to IPCO for two years after her husband’s death in 1992.  She then did volunteer work at Jefferson Regional Medical Center for several years. She met William Gandy of Strong, AR in April of 2000 and they were married on July 21, 2001.  They lived in Strong and Pine Bluff until Mr. Gandy’s death in November 2007.

Barbara was a member of Green Meadows Baptist Church. She loved the Lord, loved her church, and her church family.  She loved studying the Word and never minded talking about the love she had for Jesus or going home to be with Him.

She loved spending time with her family and wanted to be with them as much as she could.  She especially wanted quality time with her 14 great grandchildren and her first great great grandchild, so she could be sure all her little ones knew her, and they did.  At age 80, she played games with them and even learned to play soccer from Carter when he was four years old. Barbara had several names given to her by her grandchildren and great grandchildren.  All her grandchildren, but Heather, the youngest, called her Mammaw.  Heather’s name for her was Mimi.  Most of the great grandchildren called her Mammaw too.  However, five of them, Bentley, Hannah, Gage, Maverick, and Walker called her GiGi.  Carter’s name for her was Mimi, and Gracyn, two years old at the time, on her own, one day started calling her Grandma.  The whole family was surprised and puzzled by this, but the name stuck, and Gracyn and Mollie always called her Grandma.  Barbara loved every name they gave her and was delighted that some of them picked out their own name for her.  She never grew too old to play with her beloved grands even in her last few years.

She was preceded in death by her parents, both husbands, her son Larry Hall, her sister and brother-in-law, Faye and Clifford Newman, her brother Ben Muse, and her great-grandson Adison Todd Dutton.

Funeral service will be Saturday, April 23, 2022, at 2:00 p.m., Reverend Russell Jasper officiating, in the Chapel of Ralph Robinson & Son with burial following in Graceland Cemetery.